Group of Afghan Soldiers Returned to Their…

Can Help Nawaz Sharif If He Wants…

Dubai (November 27, 2018): Day Four of the second test match has resumed where Black Caps battle against the odds to avoid an innings defeat against dominant Pakistan Cricket Team.

New Zealand are currently 131/2 on follow-on and trailing by 197 runs.

Following the destructive spell by Yasir Shah in first innings, New Zealand just escaped another collapsed in the second innings as Ross Taylor rescued the team on the third day of the second Test at Dubai.

Yasir Shah, who took eight wickets in first innings, ripped through in the second innings as well and grabber two vital wickets to become the first Pakistani bowler to take 10 wickets in a day’s play. 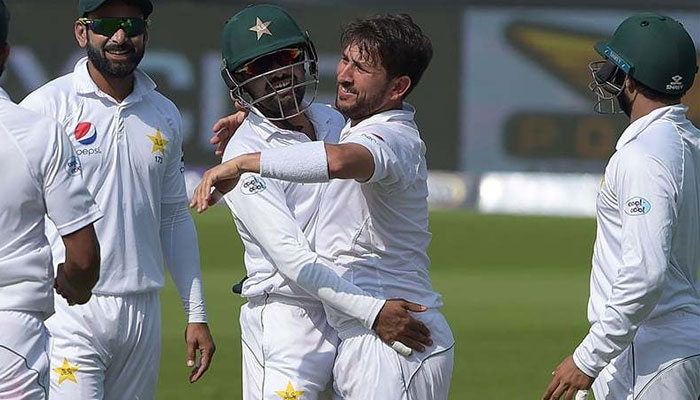 Ross Taylor is unbeaten on 49 and his partner Latham on 44, the hopes of black caps.

Yasir Shah is the sole successful bowler in the second inning as he has grabbed two for 65.

Earlier, a magical Yasir Shah performance forced the Blackcaps to reply with only 90 runs in the first innings of the second test match.

A true masterpiece performance by the Pakistani legspinner Yasir Shah brought the unpredictable Pakistani Team in a commanding position of the game.

Beginning with the magical triple-wicket maiden over before lunch, Yasir Shah continued his stunning touch to the after-lunch session to grab five more wickets and consequently driving the home side closer to leve the test series.

None of the NewZealand Batsmen was able to withstand Pakistani bowlers, particularly Yasir Shah.

This 90 run is the lowest score ever scored by NZ cricket team under the captaincy of Kane Williamson.

Pakistan have enforced the follow-on where Kiwis will be looking to overtake the 320 runs trail which, although, does not really seem to happen considering the current red-hot form of Pakistani bowlers, especially Yasir.

The play began today after rain caused a delay in the match. While being at 24/0, NewZealand opened the play of the third day after waiting long due to rain.

At the stumps of the second day, New Zealand made 24 without losing a wicket as Tom Latham on 5 and JA Raval on 17 remained unbeaten.

In the first innings of Pakistan, Haris Sohail made a career-best 147 while Babar Azam remained not out on 127 as the two added 186 for the fifth wicket. Pakistan declared there innings after piling up 418 runs.

Pakistan trail the three-match series 1-0 after losing the first Test in Abu Dhabi by a narrow four-run margin. The teams return to the same venue for the final match from December 3 to 7.

2nd Test: NZ All Out For 90, Sublime Yasir Takes 8 Wickets