London (October 30, 2017):  Former Prime Minister Nawaz Sharif announced after the crucial party huddle in London that he would return to Pakistan on November 2.

Sources claimed that important party decisions have been taken in the light of the country’s present political situation.

Talking to Media after the meeting, former PM said that he would go to Pakistan in next two days.

Replying to a question, he said that he was not given a fair trial. He said that he is meticulously observing, whatever is being done against him.

He said he did not get a fair trial in the Panama Papers case.

“If this was a fair trial, then I would not have been disqualified on an Iqama instead of Panama [papers].”

Nawaz further remarked that “none of this was fair”. The former premier also added that he understands what is going on currently. 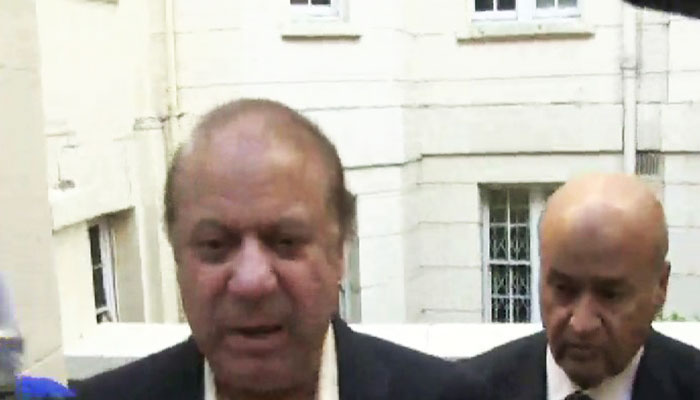 He also said there was no ‘minus-Nawaz’ formula in play and rubbished rumours of rifts within the party, adding that there was no divide in the PML-N.

The statement by the former premier came following a high-level PML-N meeting, in which the party’s leadership reaffirmed its support for Nawaz and said a minus Nawaz formula is not acceptable.

According to initial reports, it was said during the high-level huddle that Nawaz’s disqualification on the basis of Iqama had rallied supporters around him as the party feels he was not given a fair trial in the Panama Papers case.

The participants of the meeting also said that there is no space in the political landscape of the country for any unconstitutional step and there is no support from any quarter for such measures.

The high-level huddle also stated that the media was being used to create propaganda.

The three corruption references filed against the Sharif family by the National Accountability Bureau (NAB) was an important point of discussion during the meeting.

While talking to media in London, PM Abbasi said he is in London on a private visit and his meeting was part of the routine.

On the other hand, The former prime minister Nawaz Sharif said that he will return to Pakistan soon. He lauded efforts of the Pakistan Cricket Board for holding match in Lahore.

Nawaz, who was in Saudi Arabia to perform Umrah and spend time with his mother, said that CPEC is progressing as planned.

The references against the Sharif family pertain to the Azizia Steel Mills and Hill Metals Establishment, their London properties and over dozen offshore companies owned by the family.

The hearing was then adjourned until November 3, with the last chance for the former premier to ensure his presence in court.

MQM-P Postpones Meeting Due to Absence of Leaders, Workers