Objective of TLP Was Right But Approach…

No One Would Be Allowed To Form…

The win, coming in front of a hostile Abu Dhabi crowd, sealed Qatar’s progress to the title match for the first time where it will face Japan on Friday.

Qatar opened the scoring with Boualem Khoukhi in the 22nd minute with Almoez Ali adding a second 15 minutes later.

Hassan al-Haydos added a third in the 80th minute with a chip over the UAE goal-keeper and Ismaeil sealed Qatar’s progress with a goal in injury time.

The match was marred by crowd disruptions  twice where shoes and bottles were thrown at Qatari players celebrating after scoring.

The crowd could be heard chanting and booing during the playing of Qatar’s national anthem minutes before the start.

“I think the players were aware that it was going to be tough with the crowd but I think they controlled their emotions very well,” said Qatar coach Felix Sanchez.

Insult was added to indignity in stoppage time when UAE defender Ismail Ahmed was sent off after a VAR review for an elbow to the face of Salem Al-Hajri just before Qatar scored the final goal.

Showing sympathy for Qatar is punishable in the UAE with a jail term of up to 15 years.

Dubbed the Blockade Derby, the match was the first meeting between the two regional rivals since the start of the Gulf crisis. 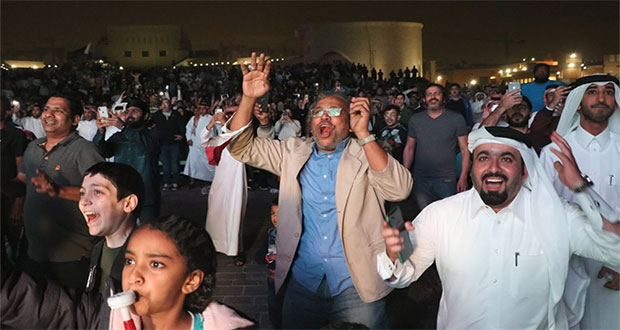 Free tickets were distributed among “loyal” Emirati fans on Sunday by the Abu Dhabi Sports Council, which bought all the remaining ones for Tuesday’s semi-final.

“I apologise to the fans for the result. We tried our best,” said UAE coach Alberto Zaccheroni, whose contract came to an end with the defeat.

“We kept trying but we have to admit the Qatar team were the better team tonight.”

Japan is the most successful team in the Asian Cup with four titles, followed by Iran and Saudi Arabia with three apiece.