All Highways, Motorway Closed Ahead of Nawaz Arrival

Lahore (July 13, 2018): All national highways and motorways are closed ahead of former prime minister Nawaz Sharif’s arrival from London. The Punjab government has taken various measures to avert any untoward incident, which includes blocking of various main intersections.

The National Highways and Motorway Police have been tasked to close key entry and exit routes, including highways and motorway, as authorities beef up security measures.

Containers were brought in on Wednesday night and installed at various points across Lahore to bar PML-N supporters from welcoming the father-daughter duo.

According to details, as many as 22 officials of the National Accountability Bureau (NAB) and 100 elite commandos will be deputed at the Allama Iqbal International Airport. 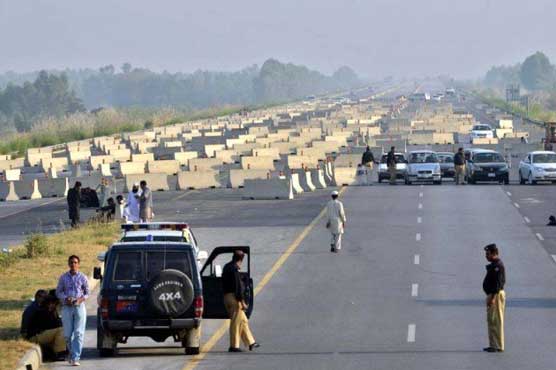 The arrangements for the shifting of the convicts, who are coming from London after inquiring health of Begum Kulsoom Nawaz, to Adiala jail through helicopter have been completed while a letter has also been dispatched to accountability court judge Muhammad Bashir to reach Adiala jail on July 13.

Follow this traffic plan to navigate your way through the expected traffic jams.

Traffic from GT Road will enter the city via Kala Shah Kaku through Thokar Niaz.

For people who have flights to catch: reach at least six hours prior to the departure time at designated areas in Lahore. They will be transported to the airport via a shuttle service.

Nawaz Sharif, thrice removed from office, was convicted in a corruption ruling and sentenced to 11 years in prison over his family’s purchase of luxury apartments in London.

Nawaz’s daughter, Maryam, was sentenced to eight years in prison after investigators found her guilty of submitting forged documents, of which her husband Safdar was a witness. He got a one-year jail term and handed himself in on Sunday, NAB said.

The PML-N supremo and his daughter are due in Pakistan Friday evening. They will be arrested on arrival at the Lahore airport.

NAB To Take Nawaz, Maryam Into Custody In Plane: Sources