ISLAMABAD: The tenure of the Army Chief General Qamar Javed Bajwa has been extended for three years for the continuation of the current efforts to restore peace in the restive belt of the country.

The notification issued by the Prime Minister Office said that the decision was taken for the continuation of the efforts being made for the peace in the region and country as well. 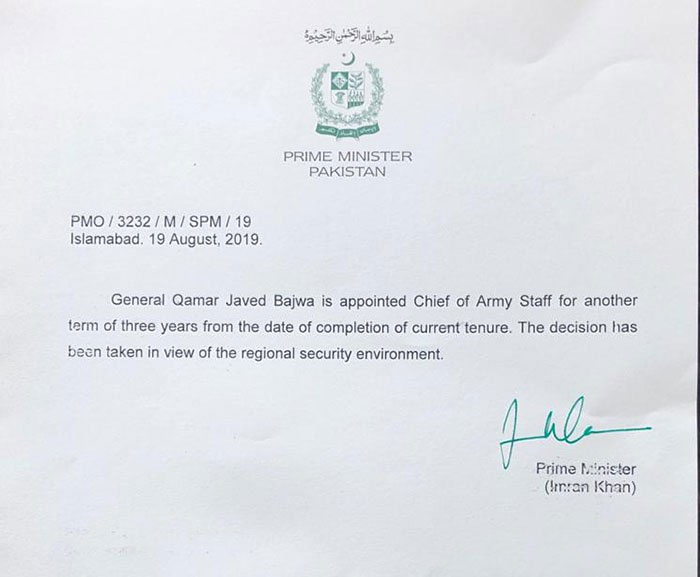 It added that “The decision has been taken in view of the regional security environment.” The notification was personally signed by Prime Minister Imran.

Gen Bajwa was appointed as the chief of army staff by former prime minister Nawaz Sharif in November 2016.

Born in Gakhar Mandi, Gujranwala, Gen Bajwa was commissioned on October 24, 1980, in the 16 Baloch Regiment, the battle-hardened force that in the past has given three army chiefs, including Gen Yahya Khan, Gen Aslam Beg and Gen Ashfaq Parvez Kayani.

According to the Inter-Services Public Relations (ISPR), he is a graduate of Canadian Forces Command and Staff College-Toronto, Naval Post Graduate University-Monterey, California and National Defence University (NDU)-Islamabad.

He has been an instructor at the School of Infantry and Tactics, Quetta, Command and Staff College, Quetta and the NDU.

He had also commanded Pakistan Contingent in Congo, where he worked alongside the former Indian army chief General Bikram Singh, who according to The Hindustan Times, described Gen Bajwa as an ‘outstanding and professional soldier’.

Before being made the army chief, Gen Bajwa was serving as the Inspector General Training and Evaluation at the General Headquarters (QHQ), the same post his predecessor General (retd) Raheel was holding before his appointment as army chief in November 2013.

Having served as corps commander of Rawalpindi, Gen Bajwa has vast experience of dealing with issues related to Kashmir and the Line of Control.