Number of Coronavirus Patients Surpasses 4601 In…

Coronavirus Deaths Closer To One Lakh Around…

‘Salaat-u-Tauba’ To Seek Allah’s Forgiveness To Be…

Complete Lock-down To Be Imposed Today During…

ISLAMABAD: PM Adviser on Information and culture Firdous Ashiq Awan has said that Asad Umar is not incensed and he will join the cabinet soon.

Talking to media after a major huddle in a chair of PM Imran, newly appointed Adviser  Firdous Ashiq Awan said that we will move forward with opposition and if they tried to hijack the parliament then definitely it will create a problem.

The adviser said that Dr. Hafeez Sheikh has been given some targets while the government economic team has been given the task to tackle the economic crisis and inflation. 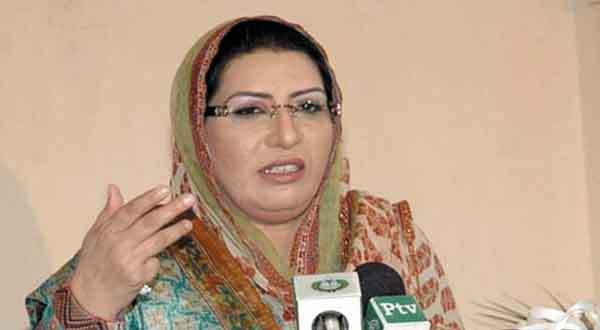 She informed that Umar Ayub has been given additional charge of petroleum ministry adding that different ministries have been given different targets so that joint strategy could be formed in combination with provinces regarding load shedding and prices of necessary goods during the holy month of Ramadan.

She said that Asad Umar will join the cabinet very soon and will be seen defending policies of Imran Khan.

The senior politician said that parliament could not be run without opposition and will move forward along with them and we will hear them if they have positive suggestions, but they have to fulfill their role responsibly.

She said that if they will hijack the parliament and stop lawmaking then problems will appear.