Ashura Observed With Due Solemnity Countrywide Amid Tight Security

WEB DESK: Youm-e-Ashur, the tenth of Muharram, was observed today (Tuesday) across the country with due solemnity to pay homage to the supreme sacrifice rendered by Hazrat Imam Hussain Razi Allah ho Ta’ala Anho and his devoted companions in Karbala.

Tazia and Zuljanah processions were taken out in all cities and towns of the country today in memory of martyrs of Karbala.

Ulema and Zakireen highlighted the bright and candid teachings of Hazrat Imam Hussain (R.A.) and various aspects of Karbala tragedy.

Elaborate security arrangements had been made to avoid any untoward incident during the mourning processions.

In Rawalpindi, the central procession of Ashura emerged from Imambargah Col. Maqbool Hussain, which culminated at Imambargah Qadeemi after passing through its designated route. 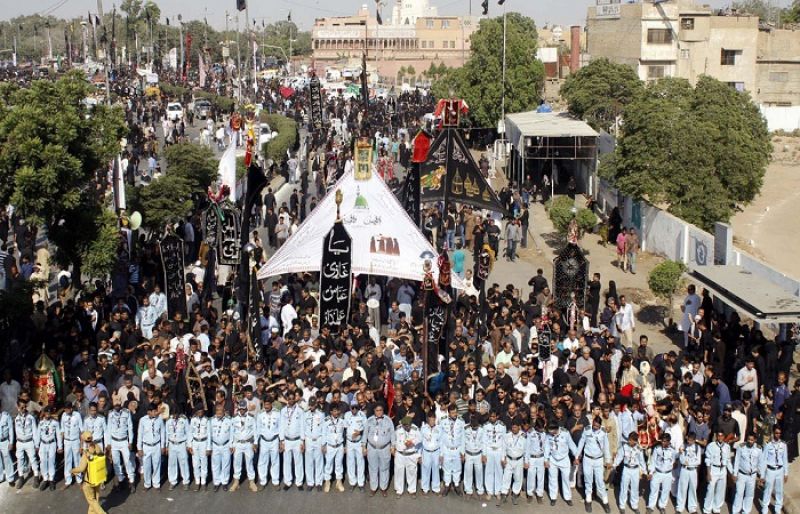 Zakireen highlighted the philosophy of the battle of Karbala, paying great respects to the grandson of Prophet Muhammad (PBUH). The mourners will hold Sham-e-Ghariban Majlis at Imambargah Qadeemi.

Sabeels of water, milk and tea had been set up along the route of the procession in remembrance of the famine-like situation faced by Hazrat Imam Hussain (RA) and his companions.

Strict security measures were in place to ensure peace and security. Walk-through gates and CCTV cameras had also been installed to check the entry and exit of people at various points.

The Metro bus service remains closed on Tuesday in view of security measures regarding Youm-e-Ashur.

Meanwhile, in Lahore, main Shabeeh e Zuljinah procession of 10th Muharram-ul-Haram was taken out from Nisar Haveli inside Mochi Gate of Old Walled City near midnight last night, is currently passing through its traditional route.

It will culminate at Karbala Gamay Shah this evening, where Shaam-e-Ghareeban will be held. Thousands of mourners from across Sindh paid homage to the martyrs of Karbala today.

In Karachi, the main procession was taken out from Nishtar park which after passing through Peoples Chowrangi, Saddar Dawa Khana and Bolten market culminated at the Imam Bargah Hussenian Iranian Kharadar.

Strict security measures were taken on the occasion. There is a ban on pillion riding in the city whereas cellular services partially suspended in some areas of the city.

In Hyderabad, the main procession began from Qadam Gah Mola Ali Gari Khata area of Hyderabad which culminated at Karbala Dadan Shah where a Sham-e-Ghareeban will be held. Fourteen other processions were taken out from different Imam Bargahs which joined the main procession.

The procession after passing through its traditional routes terminated at its starting point in the evening peacefully.

Similar processions of Tazia and Zuljinah were also taken out in Hangu, Parachinar, Kohat, Bannu and Dera Ismail Khan.

Strict security measures were taken to ensure a peaceful atmosphere on the occasion of Yome-e-Ashoor.

More than eighteen thousand personnel of police and other law enforcing agencies were deployed in different parts of the province to ensure a peaceful atmosphere on the occasion of Ashoora-e-Muharram.

Aerial surveillance of the procession routes was also being carried out.

Mobile service has been suspended in Peshawar city to avoid any untoward incident. 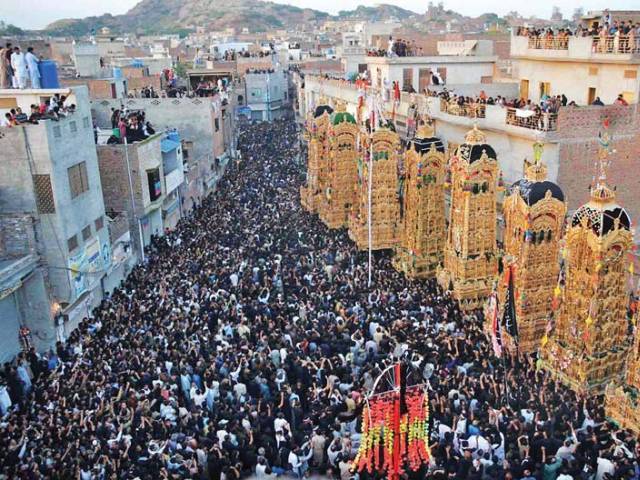 The main mourning procession of Alam, Tazia and Zuljinah were taken out from Punjabi Imambargah  Marriabad in Quetta city which after passing through its conventional routes will conclude at this very point after Maghrib Prayers in the evening.

Similarly, Sham-e-Gareeban will be held at each and every Imambargah tonight during which the philosophy of Martyrdom embraced by Hazrat Imam Hussain (R.A) and his companions will be highlighted.

In Gilgit, the main procession started from Central Imamia Mosque and after passing through traditional routes culminated at the same venue.

Meanwhile, the Imamia Council, in its resolution, expressed solidarity with Kashmiris and condemned the Indian atrocities on them.

The council also appreciated the Gilgit Baltistan administration for making the elaborate security arrangements to ensure the protection of all processions.

Another False Propaganda From India Before General Assembly Meeting