ISLAMABAD: After the recent shuffling within the Federal cabinet, Cabinet Division on Friday issued an improvised list of ministers, advisers and special assistants.

As per details, Prime Minister Imran Khan approved to shuffle his cabinet and directed the newly appointed ministers to perform their duties properly during their incubation period.

An improvised list has also been issued by the cabinet division in this regard.

According to the improvised list, the number of federal ministers, state ministers, advisers and special assistants has been increased to 47.

Asad Umar and Amir Kyani still remained the part of their list as Abdul Hafeez Sheikh is abroad and will return to take charge in a few days. 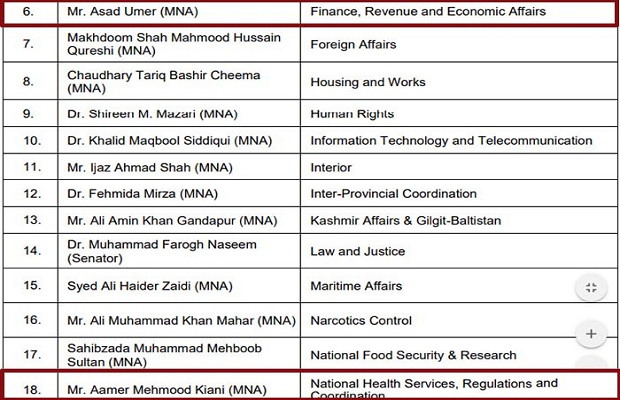 The improvised list also includes the names of special assistants who will be considered equivalent to a state minister.

In the new list, Fawad Chaudhry’s portfolio has been changed with the minister of Science and Technology.