LONDON: Pakistan Muslim League (Q) leader and former Prime Minister Chaudhry Shujaat Hussain has said that there is no big deal on National Accountability Bureau (NAB) sending a notice to summon the wife and daughters of the Opposition leader in National Assembly Shehbaz Sharif for probing any case.

While talking to media after reaching London, the PML-Q leader revealed the current nature of the relationship he has with Mian Shehbaz Sharif.

He said that both he and Shehbaz do not wish to hold any meeting.

When asked a question on NAB, Chaudhry Shujaat responded that there’s really no big issue if the Accountability Watchdogs have decided to call up PML-N president’s wife and daughters for investigation in assets beyond means case.

“Our daughters were too sent notices. We have also given answers to NAB in the past”, he maintained. 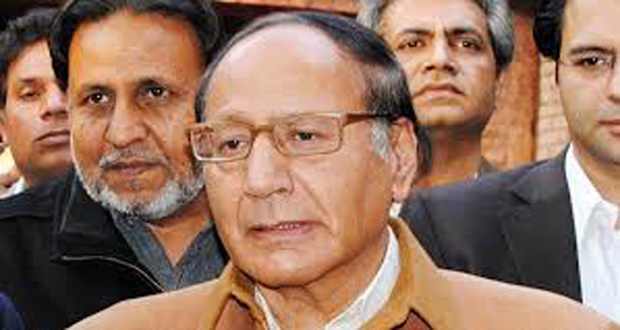 Reiterating his call of cooperation with PTI-led government as an alliance party, the former Premier confided confidence in the leadership of current Prime Minister Imran Khan.

“We will continue to assist Imran Khan as he is working with goodwill. Imposing allegations on certain someone for inflation is not correct as everyone is accountable”, he concluded.