Fayyaz Suggests Opposition To Get Tested For…

Lack of Resources Not To Hinder Our…

Fix-it Puts Up Cut Out of CM…

COLOMBO: At least 215 people were killed with more than 500 injured after six bomb blasts rocked Srilanka’s capital Colombo on the morning of Easter Sunday, according to Sri Lankan media.

As per Sri Lankan media, the majority among the 500 injured are in critical conditions with all hospitals filled and no more room for the injured persons to be admitted.

The deceased include 35 foreigners who had arrived at the capital to participate in the religious event of Easter, Sri Lankan media reported.

It was also revealed that the majority of foreigners came from United States, Denmark, China, Japan, Pakistan, Morocco, India and Bangladesh.

Appeals have been done on social media for donations of blood as it is expected that the death toll will continue to rise, Sri Lankan media added.

Police have said that shreds of evidence are being gathered from the spots of incidents, however, no group has claimed the responsibility for the terrorist attacks.

Moreover, the local police have urged people to stay inside their homes. 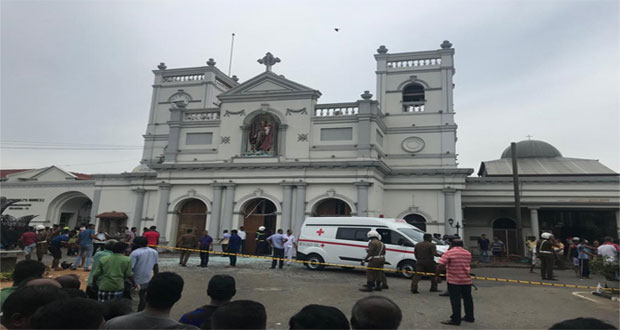 The first explosion took place at St Anthony’s Church and second at St. Sebastian’s Church, whereas Shangri-La Hotel, Cinnamon Grand Hotel and Kingsbury Hotel are among the hotels which were also subjected to explosions in the capital.

Sri Lankan Premier Ranil Wickremesinghe has summoned an emergency meeting of the Security Council and has announced to shut down all educational institutions for two days.