‘Time To End’ US War in Afghanistan…

Karachi(July 25, 2018): Voting for general elections-2018 has begun across the country and around 105.95 million registered voters will exercise their right of the franchise today to elect their representatives for the National Assembly and provincial assemblies for the next five years.

The polling process started at sharp 8 am and will continue till 6pm without break today. Those who are inside the premises of a polling station by the expiry of this time will be allowed to cast their votes.

The nation will elect 270 members of the National Assembly and a total of 570 members of four provincial assemblies for the next five-year term (2018-2023) today.

Around 105.95 million eligible voters – 59.22 million males and 46.73 million females – will exercise their right to vote to mark another democratic transition from one elected government to another.

Election Commission of Pakistan has established 83, 307 polling stations, 17,000 of them have been declared as sensitive.

As many as 53,000 international, national and local observers and media persons will monitor the elections.

A large number of candidates, including many electables, are contesting as independents. If elected in big numbers, they would have an important role in formation of governments in Centre and provinces.

Authorities have declared 17,007 polling stations ‘highly sensitive’, a term used for an area where there has been violence in the past or the law enforcement agencies report chances of violence like fighting among the supporters of the candidates.

Of these highly sensitive polling stations 5,878 are located in Sindh, 5,487 in Punjab and Islamabad Capital Territory, 3,874 in Khyber Pakhtunkwa (K-P) and 1,768 in Balochistan. However, the authorities cannot map out security alerts of serious nature like terrorist attacks. According to the ECP secretary these alerts reflect possibility of attacks on polling stations, election staff and leading politicians.

The country has seen a significant decline in terror incidents over the past couple of years. However, since the electioneering gained momentum later last month a new wave of terror attacks also started in the K-P and Balochistan, the provinces worst affected by violence in last two decades.

Interestingly, the ECP warned of such attacks much before the election process formally began. The ECP secretary in May this year told a parliamentary panel about the threat during a briefing.

Besides providing security for transportation and storage of election material, it is for the first time that officials of the armed forces, mainly the Pakistan Army, have been deployed at all polling stations. 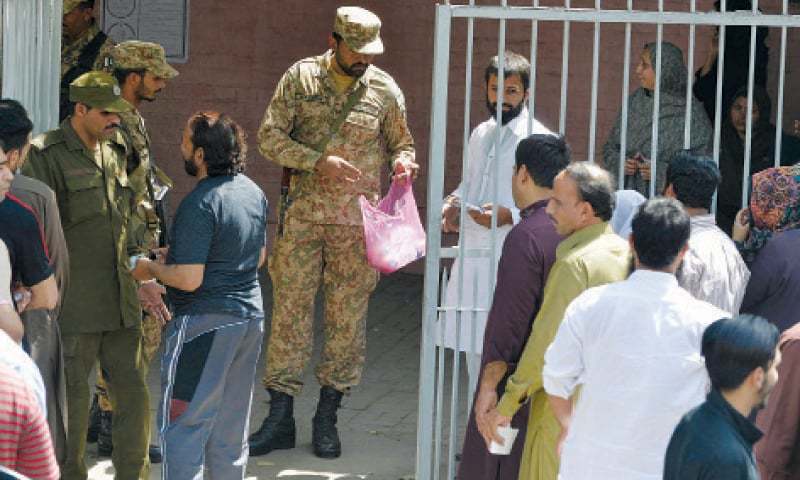 The ECP is using Android-based mobile application called Results Transmission System (RTS) in this general election. The presiding officers will be required to enter polling results into the application along with the picture of FORM XIV which will transmit data to the ECP server in real-time.

The presiding officer shall immediately take snapshot of the result of the count and, as soon as connectivity is available and it is practicable, electronically send it to the commission and the returning officer before sending the original documents under Section 90.

Another provision of law says the returning officers (ROs) would have to compile the provisional results before 2:00 am the day immediately following the polling day, and communicate these results electronically to the ECP.

The National Disaster Management Authority (NDMA) has issued alerts to the government agencies concerned and provincial disaster management authorities (PDMAs) for a possible flood in River Indus and heavy rains in different parts of the country.

According to a statement issued on Tuesday said that heavy downpour is expected on July 25 and 26 across the country and directed the concerned department to carry out required arrangements.

NDMA warned that low flood being observed in nullahs of Dera Ghazi Khan while flood likely to hid Ravi and Chenab during both days.

Earlier, Caretaker Minister of Information Syed Ali Zafar, in a video message, encourage people to cast their votes without any fear in the General Election today.

“These are the most important elections in country’s history,” he said, adding that the caretaker government, the Election Commission of Pakistan, and other institutions have taken all measures to ensure that the elections are peaceful.

Polling Begins For General Polls Across The Country