Nawaz Sharif formally appointed Gen Ziauddin as the new head of the military at his official residence in Islamabad that afternoon. But from the start it appeared things were not going to plan – with every senior officer reportedly refusing to accept his command. 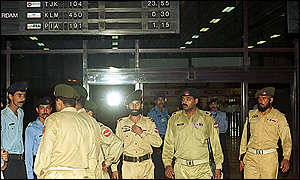 Troops surrounded the Prime Minister’s home, closed all the major airports and shut down the state-run television and radio stations for several hours.

Back in Islamabad army chiefs loyal to Gen Musharraf began to mobilise troops stationed in nearby Rawalpindi.

As troops poured onto the streets of the capital, the 111 Brigade stormed the state television station in Islamabad and shut down the signal.

At Mr Sharif’s residence, troops disarmed the guards and entered the home. Mr Sharif refused to resign or rescind his orders to sack the army chief of staff, so he was escorted from the building and placed in a guest house close to the airport.

Gen Musharraf’s flight approached Karachi airport at about 18:30. But air traffic control refused permission for the plane, holding some 200 passengers, to land.

The general said to have personally spoken with air traffic controllers, demanding the right to land. The controllers initially refused, but as soldiers surrounded the control tower they allowed the plane to land.

Gen Musharraf later said the plane had only seven minutes of fuel remaining.

At 0250 on Wednesday morning, Gen Musharraf addressed the nation in a pre-recorded message, bringing the Sharif era to a close.

Two days into seizing the government, on 14 October 1999, General Musharraf, who then-acted as the country’s Chief Executive, declared a state of emergency by issuing a Provisional Constitutional Order that suspended the writ of the Constitution of Pakistan.

Musharraf was not ready to quit office of COAS but he was forced to do so by the massive lawyers’ movement. He handed over the command of army to General Ashfaq Pervaiz Kayani on November 28, 2007.

Pervez Musharraf inspects his final guard of honour after resigning as president of Pakistan.