No Muslim Can Tolerate Disrespect Of Prophet…

Will Only Convey Concerns To PM: Jahangir…

Quetta Gladiators achieved the 139-run target set by Peshawar Zalmi in the last bowl of 18th over of the match by losing two wickets.

Muhammad Husnain of Quetta Gladiators awarded man of the match as he took three-wining-wickets of Peshawar Zalmi.

Quetta Gladiators opted to field first after winning the toss and invited Peshawar Zalmi to bat who scored 138 runs after losing eight wickets.

Umar Ameen, Sohaib Maqsood were prominent players of the Peshawar as they scored 38 and 20 runs respectively while Muhammad Husnain of Quetta Gladiators three-vital-wickets.

Darren Sammy, captain of Peshawar Zalmi said that we will try to show the best performance of the PSL four at the national stadium Karachi. 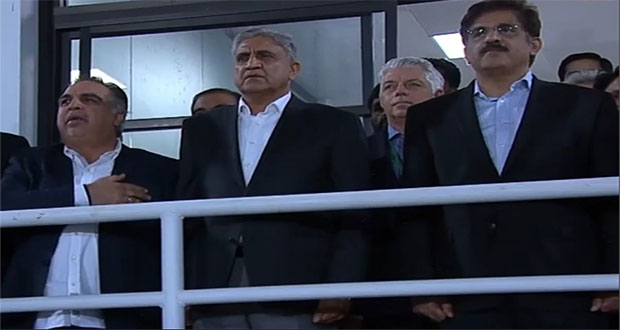 Minister of the state for Interior Shaharyar Afridi is also among the guests at the stadium besides Chief Minister Sindh Murad Ali Shah, Governor Sindh Imran Ismael and other provincial leaders.

Just before the much awaited final  Pakistan Super League concluding ceremony began where one-minute silence observed for the massacre of the Muslims in Christchurch, New Zealand on Friday.

Fakhar-e-Alam hosted the ending ceremony of the PSL season four.

It is pertinent to mention here that Karachi hosted eight matches of the season including today’s final.

Peshawar Zalmi and Quetta Gladiators have been, indisputably, the top two teams in the PSL this season, winning seven of their ten league matches each. But on the head-to-head record, Quetta have the upper hand, winning all three games between the two sides throughout this season. 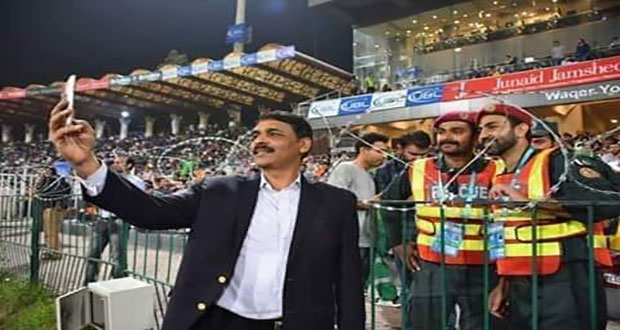 Both teams have unique and formidable strengths, with Peshawar relying heavily on their pace attack, to the extent they went into the crunch Eliminator against Islamabad without Liam Dawson.

Quetta’s spinners have, on the other hand, made key contributions to their run to the final, led by Mohammad Nawaz. In addition, the experience of Sohail Tanvir and the raw pace of Mohammad Hasnain have lent a diverse set of attributes to the attack.

Both sides are laden with match-winners for every situation. What bodes well for the final is almost every player from both sides is in form, firing in all departments. In previous years, Quetta had issues with their overseas players not touring Pakistan, but on this occasion, full contingents from both sides are present in Karachi. While both sides play their third final, Peshawar have the advantage of experiencing victory in the PSL final in 2017, while Quetta are yet to get over the line.

The final is expected to be a full house with 32,000 spectators, helped by Quetta Gladiators being captained by local boy Sarfaraz Ahmed. Peshawar are always a popular team, led by the ever-affable Darren Sammy.

The main question for Peshawar is whether to play Liam Dawson, which gives them an extra spinning all-around option or to stick with the quick death-overs specialist Chris Jordan.

The National Stadium has changed dramatically since its redevelopment. With the ground inactive for lengthy stretches of time, the grass was allowed to breathe, and the soil gave a rest. Recent totals suggest this could be another high-scoring affair, and both teams have a real decision to make about what to do at the toss. A cool breeze is expected to blow for the duration of the match, but the morning rains that have been a feature across the past week should not impede a full game.