Fazal Says Batons To Be Used In…

PDM Has Crossed All Limits In Country’s…

NEW DELHI: India announced Sunday a general election to be held over nearly six weeks starting on April 11, when hundreds of millions voters will cast ballots.

The poll will see right-wing Prime Minister Narendra Modi run for a second term against Rahul Gandhi of the Gandhi-Nehru dynasty to lead the world’s second-most populous nation.

Some 900 million voters from the Himalayan peaks to the deserts and tropical shores are eligible to vote for a new government for the next five years in an enormous democratic undertaking. 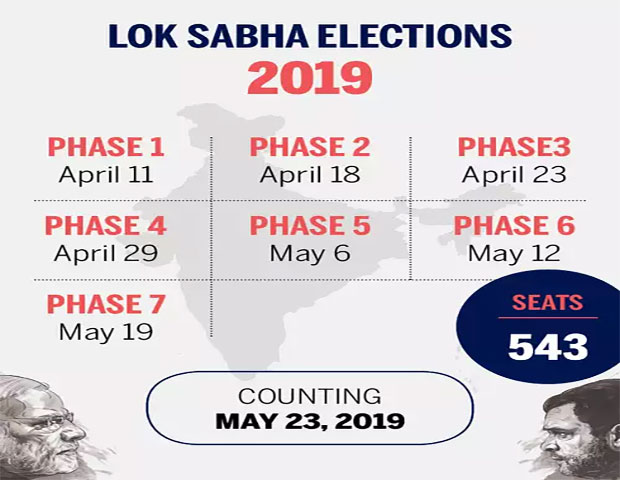 From April 11 to May 19 voters will elect 543 lawmakers to India’s lower house of parliament, the Lok Sabha, which governs the Asian nation of 1.25 billion people from the capital New Delhi, the electoral commission said Sunday.

Counting will be completed and final results announced on May 23, it said.

Modi’s Hindu nationalist Bharatiya Janata Party (BJP) and Gandhi’s left-leaning Congress are the two strongest challengers among hundreds of political parties from across the culturally and geographically diverse country.

Modi, whose right-wing party won an outright majority in the 2014 elections, enters the race in a strong position, the 68-year-old remaining a popular figure and the BJP a well-oiled political machine.

In recent weeks he has been able to bolster his nationalist credentials in India’s most serious standoff with Pakistan in years, sparked by a suicide bombing in Pulwama on February 14 that killed 40 Indian paramilitaries.

Twelve days later the Indian air force bombed what New Delhi claimed was a training camp of Jaish-e-Mohammad in a forest in Balakot, the first time since 1971 that India hit territory beyond Kashmir.

Doubts have been raised about what the raid achieved, and when Pakistan carried out its own air raid a dogfight ensued and an Indian aircraft was shot down and its pilot captured by Pakistan.

But Modi has shrugged this off and has continued to talk tough, accusing the opposition of being weak.

But opinion polls have suggested ebbing support for the BJP, and even that it may fall short of the 272 seats it needs to form a government on its own.

He has also gone on the offensive over Modi’s economic record, with the Congress state wins attributed to the prime minister’s perceived failure to help impoverished farmers and to create enough jobs.