Interesting Ritual Of Marrying A Crocodile In Mexico

WEB DESK: In an interesting development it has been revealed that there is a town in Mexico in which the elected Mayor has to marry an alligator as part of their traditional ritual, AbbTakk news reported on Sunday.

As the world is full of diversity in terms of culture, religions and rituals there is a town in Mexico in which every elected Mayor has to marry a crocodile because of the beliefs of the residents of the area. The people living in the town are mostly tied to the profession of farming and fishing and believe that if their mayor will marry a gator it will turn the coin of their fate.

The marriage ceremony is held whenever the residents choose their new mayor and the wedding is attended by all of the people of the area. 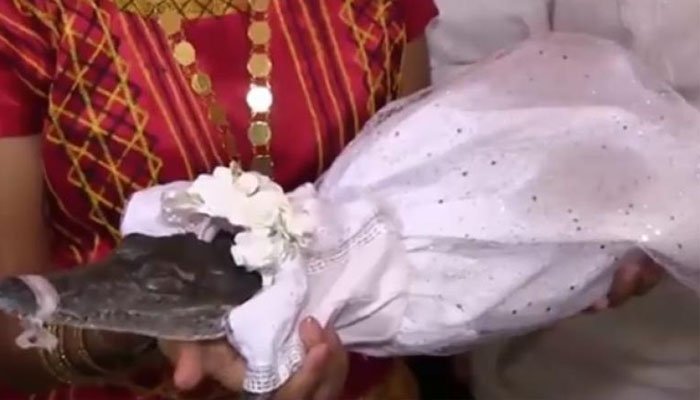 To prepare for the wedding, the crocodile — is baptized in the San Pedro Apóstol church before she is dressed in a white wedding dress and crowned with a wreath of flowers. A community leader then takes over, cradling the bride in her arms and dancing her door to door through the pueblo, accompanied by a traditional band.

Once inside, city council members gather round to witness the proceedings, where the mayor lays eyes upon his bride for the first time in her wedding dress. Man and crocodile then consummate their union with a kiss.

The marriage sealed, the mayor rushes out of city hall to dance in a display of contentment before the whole pueblo, officially closing the ceremony — until next year.