K-electric Management Should Be Put On ECL: CJ

Karachi: Chief Justice Gulzar Ahmed has expressed anger over continuous load-shedding in Karachi while he ordered to remove all billboards from private and government properties. 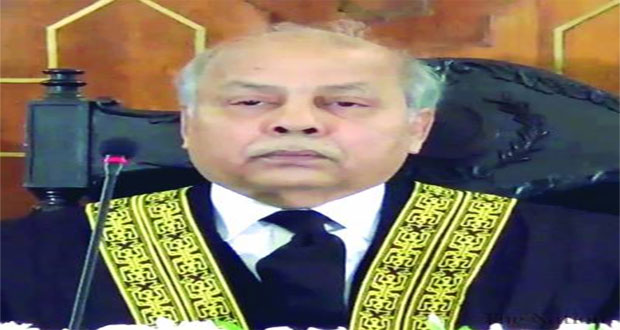 Expressing his anger on continuous load shedding in the city, he called Chief Executive Officer (CEO) of K-electric in the court and the CEO appeared before the court while the CJ remarked” daily 10 people are losing lives due to electrocution in the city and his bail should be cancelled.

He said that a case should be filed against the K-electric CEO and K-electric administration should be put on the exit control list.

Lamenting on the K-electric, Honorable Chief Justice said “how people are passing their lives as their light and air have been shut.”

Chief Justice hearing suo-motu notice taken by him few days ago over falling of billboard in the Karachi he ordered to remover all the billboard from public and private properties.

During course of the hearing, lambasting on the performance of the Sindh government, Justice Gulzar Ahmed remarked”provincial ministers roam free in their luxury vehicles and Chief Minister visit areas by Helicopter but do nothing.”

During hearing of the occupation on hill park land, commissioner Karachi said that they issued several notices but they didn’t get any response adding that a private school has taken stay from the Sindh High Court while the CJ remarked that” have you seen revenue of the schools? they earn billions of rupees.