KARACHI: Police have apprehended a suspect allegedly involved in shooting two persons to death including a cop in Defence Phase-VI area of the metropolis.

According to sources, the police have registered a case under anti-terrorism act against the apprehended suspect.

SSP South Pir Muhammad Shah while talking to media has revealed that the apprehended suspect is an addict to alcohol and ice.

“The culprit was arrested from a private hospital in the injured state,” said SSP South.

“Accused has been identified by the injured and other eyewitnesses and belonged to Chaghi area of Balochistan,” added PM Shah.

“The apprehended suspect was drunk and opened unconditional firing in an unconscious state and possess a license issued from Jaffarabad district of Balochistan,” concluded Pir Muhammad Shah.

Earlier today, Two people were killed including a police official and one other injured in a firing incident at Defence Phase-VI area of the metropolis. 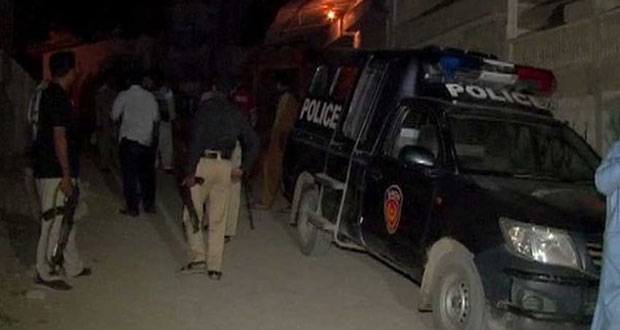 As per details, unknown armed assailants opened fire at 26th Street area of Defence Phase-VI in the metropolis. As a result, two people were killed including a police official on the spot and one other was injured.

According to eyewitnesses, the attackers were drunk and managed to flee from the crime scene easily after the incident.

Police have registered a case and started its investigations into the incident. According to initial investigations, the attackers used 9mm pistols for the crime.