Govt Not Serious in Taking Action Against…

KARACHI: Millions of Muslims have started performing Itikaf across the country tonight.

All the major mosques have completed the registration process of the people who want to perform Itikaf.

Thousands of Muslims gathered for the performance of Itikaf in all major cities of Sindh including Karachi. Special security measures are ensured at all mosques in the metropolis to avoid any untoward incident.

Prayers for the country’s sovereignty and stability, elimination of terrorism and prosperity of Muslim Ummah will also be offered. 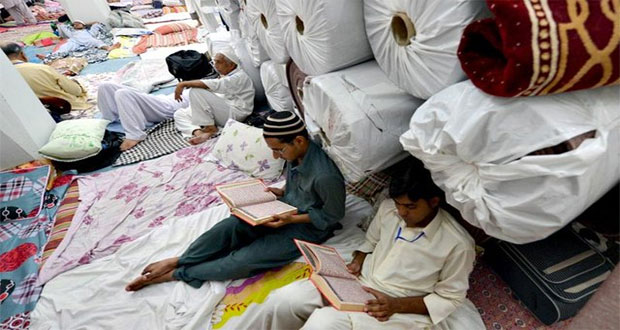 Itikaf is a spiritual offering in Islam observed in the last ten days of Ramadan during which the believers detach themselves from other people and indulge solely in act of worshipping, keeping the worldly affairs at an arm’s length. One can either offer Itikaf in mosques or at their own home but they have to stay at a particular place for the observation.

The last ten days of Ramadan are considered to be superior, during which the faithful opting for Itikaf, while the odd nights of the Ashura, i.e. 21st, 23rd, 25th, 27th and 29th are considered as prayers nights, as Muslims search Lailatul Qadar in these nights.

According to the sayings of Holy Prophet Muhammad (S.A.W.W) the prophet himself observed Itikaf and directed his followers to do so for seeking the ‘Lailat-ul-Qadar in the last ten days of Ramazan.

The observers will spend most of their time in reciting Quran, offering special prayers and seeking blessings from Allah during Itikaf.

Hamza Claims ‘Tsunami’ Of Inflation To Hit Country After Budget