NEW DELHI: A new incident of India’s hatred towards Muslims has been reported on Saturday as one of the Jail Superintendent tortured a Muslim inmate in his jail and stamped an ‘Om’ sign on his body.

As per details, a Muslim inmate who was serving his prison term in India’s Tihar jail complained over the non-functional stove to Superintendent of his jail which went unwell with the latter and he stamped an ‘Om’ sign on the body of former. 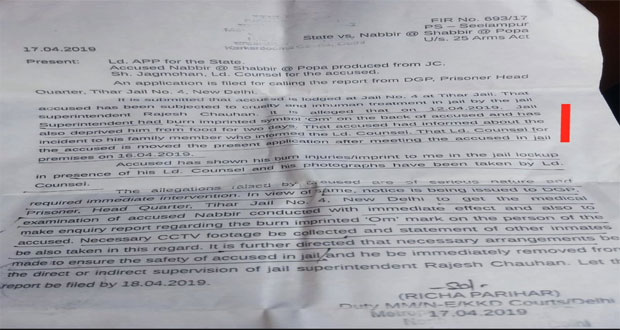 Muslim inmate via his lawyers filed a petition in a local court in which he stated that the Superintendent named Rajesh Chohan tortured him and stamped an ‘Om’ sign as he complained to him over non-functional stove within the prison.

However, the court after reviewing his stamped sign has issued the notices to jail authorities and summoned them within two days.