Kabul (December 15, 2018): Foreign Minister Shah Mehmood Qureshi said that Pakistan, China and Afghanistan will have to collectively foil the designs of enemies of peace in the region.

Speaking at the trilateral dialogue in Kabul on Saturday, he stressed for bolstering regional cooperation in diverse sectors.

Reaffirming commitment to eradication of terrorism, the Foreign Minister was of the view that better border management between Pakistan and Afghanistan and intelligence sharing will be greatly beneficial for both the countries.

He said that Pakistan will continue to play facilitative role on Afghan reconciliation process.

Shah Mehmood Qureshi said that we will do everything to support the growing momentum towards reconciliation provided others play their due role and share responsibility and create an enabling environment towards that end.

He said that Pakistan has always supported dialogue process for peaceful resolution of Afghan conflict.

He said that our stance has now also been vindicated by the international community.

The Chinese Foreign Minister Wang Yi in his remarks said that his country desires to make the Afghan reconciliation process successful.

He said that we will play our role to reduce trust deficit between Pakistan and Afghanistan.

Wang Yi said that his country also wants to further strengthen relations with Afghanistan and desires to make it part of CPEC.

He said that we support an Afghan led and afghan owned peace process.

Foreign Minister Shah Mehmood Qureshi, who is leading the Pakistani delegation at the dialogue, is accompanied by Foreign Secretary Tehmina Janjua and other senior officials of the Foreign Office.

During his day-long visit, the foreign minister will hold bilateral dialogue with his Chinese counterpart.

Speaking to the media ahead of his departure, the foreign minister welcomed the Chinese initiative of holding trilateral dialogue. “Both Pakistan and China desire peace, stability, prosperity and development in Afghanistan,” he said.

“We are carrying the message of friendship and peace to Afghanistan,” he added. The foreign minister stressed that peace is imperative to for the region to move forward on the path of sustainable development.

The second round of Pakistan-Afghanistan-China trilateral dialogue is being held in Kabul today to discuss peace as well as economic and counter-terrorism cooperation.

A trilateral cooperation framework on counter-terrorism is expected to be signed at the meeting.

China, a close ally of Pakistan, has lately deepened its economic and political ties with Afghanistan. Beijing is actively using its influence to bring the two uneasy South Asian neighbours closer. 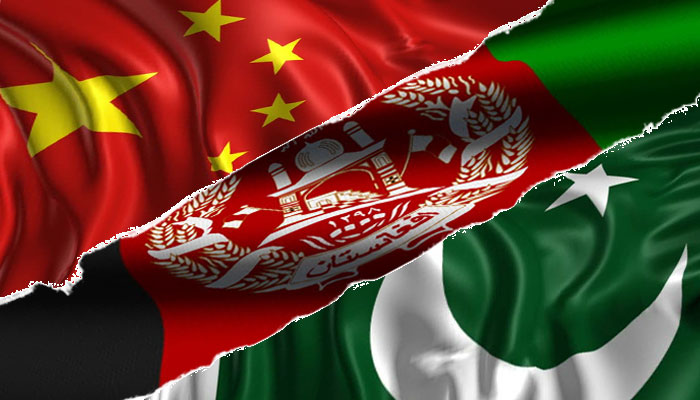 China has invested billions of dollars in infrastructure projects in Pakistan over the past five years as part of President Xi Jinping’s global Belt and Road Initiative (BRI).

Chinese and Pakistani officials say they are considering expanding the bilateral China-Pakistan Economic Corridor, or CPEC, to Afghanistan, through road and rail links to promote connectivity and economic development in the war-ravaged country.

Pakistan says the expansion of CPEC to Afghanistan will give it better access to Central Asian markets for Pakistani exports.

Political tensions, coupled with allegations that security agencies in both countries support militant groups that bring deadly attacks against one another, continue to strain relations between Kabul and Islamabad.