TEHRAN: Iranian President Hassan Rouhani and visiting Prime Minister Imran Khan on Monday announced that a joint ‘Rapid Reaction Force’ will be set up in order to counter the terrorism, especially focusing on border security.

The decision on the matter was agreed by the two prominent leaders of the Muslim World in a meeting earlier today.

Later, in a joint presser held by Premier Imran Khan and Iranian President, the announcement was officially done.

Hassan Rouhani, on this occasion, said that both Iran and Pakistan share a relationship of longheld, cultural and religious ties, thanking Prime Minister and the delegation accompanying him for visiting the country.

“We see our relations as very precious. In recent times, events of terrorism have escalated on the borders for which we will have to certain steps to strengthen the border security”, the Iranian president said. 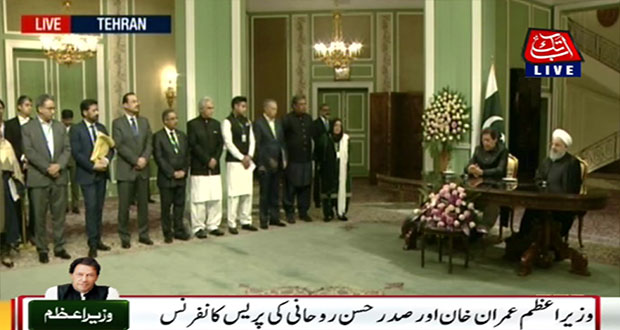 “Iran and Pakistan have mutually decided to increase their cooperation with each other for the elimination of terrorism, agreeing to set up a Joint Rapid Action Force”.

“Other than that, Iran is also ready to supply electricity to Pakistan. We want to see an increase in commercial activities between both countries”, he added.

‘Terrorism Has Created Distance Between Both Countries’

Prime Minister Imran Khan tabling his views during the joint press conference said that the acts of terrorism have created great distance between Iran and Pakistan, calling for strengthening the existing bilateral relation.

“We will never allow any militant group to operate from Pakistan’s soil. I’ve felt that both countries are distancing themselves owing to terrorism”, the Premier said. 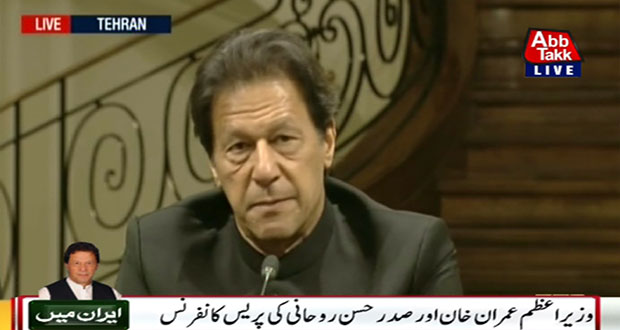 Recalling recent Hajazarganji blast which claimed 20 lives, Prime Minister Imran said that Iran and Pakistan’s Security Chiefs will hold a meeting to take each other in confidence.

“We will cooperate with each other in helping bring a political settlement in Afghanistan,” he added.

PM also thanked Iranian President for the welcome which he was given upon his arrival to the country.