RIYADH, TASHKENT, TEHRAN: Ceremonies were held on the occasion of Pakistan day in Pakistani consulates in Saudi Arabia capital, Riyadh, Tehran and Tashkent.

Flag hoisting ceremonies were held in the Pakistani embassy in Riyadh and consulate in Jeddah early in the morning where all three forces representatives, hundreds of Pakistani community members and children attended the gatherings.

President Dr Arif Alvi and Prime Minister Imran Khan messages regarding the day were telecasted for the participants while the gathering vowed to make Pakistan the greatest country of the world where they also pledged ending ethnicity, sectarianism, regional prejudice to become good Pakistani.

They also renewed their pledged to support just cause of Kashmiris while Participants said that those nations always lived who celebrate their national day with pomp and show. 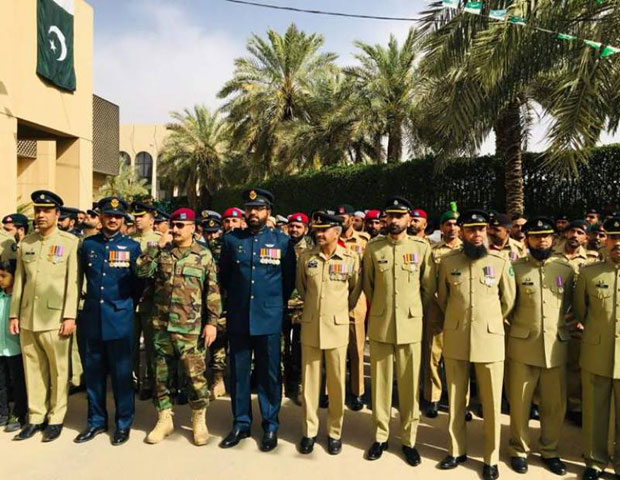 People said that we have been living in a free environment since independence due to efforts of our great founding father Quaid-e-Azam Muhammad Ali Jinnah and others.

Pakistan day also celebrated in the capital of Azerbaijan, Tashkent in a splendid manner where prayers were made for country security and stability.

The colorful gathering was also held in Iran capital, Tehran where children made the ceremony full of colours by singing patriotic songs.

The country ambassador in Iran Rifat Masood initiated the ceremony by hoisting the county flag on occasion of Pakistan day.

Rifat Saeed in his address to the crowd said today is the day to renew our pledge of loyalty with the country adding that the country came into being by tireless efforts of the founding father Muhammad Ali Jinnah and millions of people.

Pakistan National Day Celebrated at Tehran.
Pakistan National Day was commemorated with national fervor and enthusiasm today at the Ambassador's residence, Tehran in a simple but impressive ceremony attended by a large number of Pakistanis.#PakistanDay #23rdMarch #Pakistan pic.twitter.com/FiKJwTiOTG

He said that we should unite and work hard to fulfill the dream of our founding fathers.