The players will participate in training session today under the supervision of coaches where the team will be looking to overcome it’s lacking from the previous match-up against England.

Both veteran players Shoaib Malik and Mohammad Hafeez will also take part in the practice sessions, however, team management is yet to announce if either of them will be part of the team in 3rd ODI.

In second ODI, after the significant fight back by the Pakistani batsmen, English bowlers hold their nerves in last overs and beat Pakistan at Southampton. 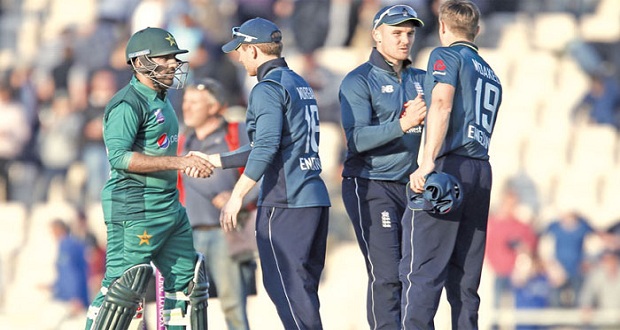 Pakistan bundled out at 361 with short of 12 runs that put England up by 0-1 in five-match series.

The tourists needed 19 runs off the final over but managed just six, thanks to some excellent death bowling by an otherwise expensive Chris Woakes (72-1 in 9 overs) as the pairing of captain Sarfaraz Ahmed and Hassan Ali failed to get their side over the line.

The fourth ODI ton of the Fakhar Zaman was the key part of the Pakistani batting as he showed his class and posted 138 runs only on 106 balls with four sixes and 12 fours.

Babar Azam, 51, and Asif Ali’s billeting 51 could not help the team to get the victory stand.

England’s all top order batsmen were among the runs as they piled up a huge total of 373 runs for three wickets against Pakistan in the second One-day International here on Saturday.

However, the star of the English batting was JC Buttler who smashed 110 runs innings which was envisaged with nine mighty sixes and six fours.