Past Govts Ruled Over Base of Corruption:…

US Navy Warship Is Still Ablaze

Chasing an easy target of 135, the Gladiators completed their second victory in the third match with 17 balls remaining.

Successive timely wickets by Quetta bowlers restricted Islamabad United to 134 runs in the first innings of the match. But the team faced an early setback with the wickets of Shane Watson and Umar Amin.

A no-ball from Rumman Raees saved Watson from dismissal after he was caught by Misbahul Haq. However, the opener conceded his wicket to fast bowler Steven Finn, giving an easy catch to Raees over mid-wicket.

An inside edge on a short of a length delivery bowled Umar Amin.

Later in the game, out-of-form Asad Shafiq failed to click in this game of the tournament as well as he failed to hit the ball, which went to hit the stumps on the last ball of the fifth over.

Fast bowler Raees was taken off the field as he faced a knee injury during the game. Pietersen departed on the 15.2 overs of the game, after giving an easy catch on the ball of Steven Finn.

Earlier in the first innings, Quetta Gladiators restricted Islamabad United to 134 runs in the match. Both the teams made changes in their squad as Misbah-ul-Haq and JP Duminy joined United’s final playing-11, while John Hastings and Mahmudullah are featuring for the Gladiators.

Fast bowler Anwar Ali gave an early breakthrough to Quetta after taking down United’s opener Chadwick Walton for eight runs in his second over of the match.

With an absolute gem of a delivery, Rahat Ali bowled Asif Ali (6) on his very first ball of the match.

Skipper Misbah-ul-Haq walked back to the dugout as he was caught in the deep by Mahmudullah on the bowl of Shane Watson. On a strike rate of 88, Misbah scored 22 runs. Both the teams have won one match and lost one match so far. 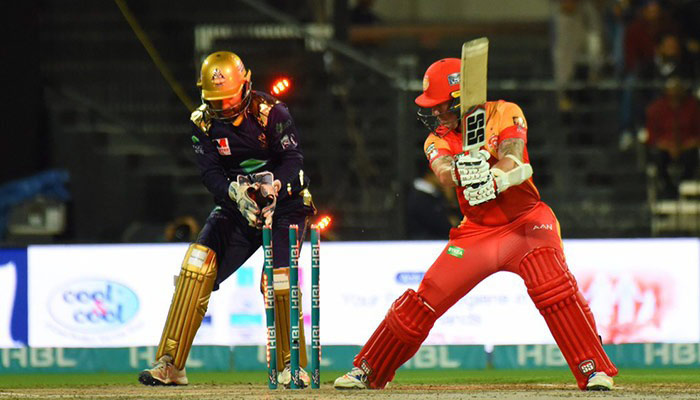