Lahore (July 09, 2018): The Elec­tion Commission of Pakis­tan (ECP) on Monday disqualified a Pakistan Tehreek-i-Insaf (PTI) candidate who used the pictures of the chief justice of Pakistan and the army chief in his campaign advertisements and posters.

PTI’s candidate from Gujranwala’s PP-53 constituency, Nasir Cheema, was ruled ineligible to contest the July 25 elections after he was found to have violated the electoral code of conduct issued by the commission.

The ECP had quizzed Cheema over the controversial posters last week and asked him to submit a reply explaining as to why he should not be disallowed from contesting the polls.

“Are they related to you? What is the army chief’s and CJP’s link to the elections? On what basis did you put up their pictures?” an infuriated Chief Election Commis­sioner (CEC) Sardar Mohammad Raza Khan had asked the PTI candidate.

On Monday, Cheema, along with his lawyer Gohar Ali Khan, appeared before a five-member bench headed by the CEC and submitted a reply.

The lawyer initially was of the stance that the photos of Chief of Army Staff Gen Qamar Javed Bajwa and Chief Justice Mian Saqib Nisar had been edited onto the posters, which he said did not belong to his client’s electoral campaign. 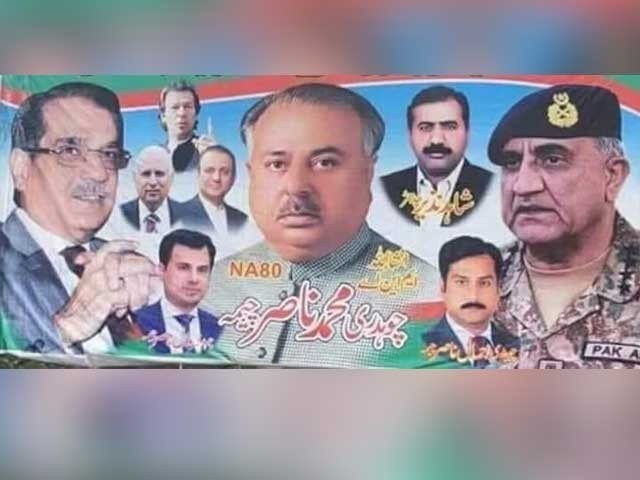 He said the posters in question were put up in solidarity with Supreme Court judge Justice Ijazul Ahsan after unknown gunmen opened fire on his residence in April.

But Abdul Ghaffar Soomro, an ECP member from Sindh, questioned whether Justice Ahsan’s photo was on the said poster (it only featured the CJP’s photo).

CEC Khan reminded the counsel that Cheema had admitted in the last hearing that the posters had been printed before the election schedule was issued.

After hearing all arguments, the ECP bench reserved the verdict on the matter. It later ruled Cheema disqualified from the electoral race for using photos of two heads of institutions on the posters.

The CEC had emphasised during the last hearing that it was not a question of when the posters had been put on display and asked Cheema to understand the question as to why these images had been put up at all.