PML-N Has Record Of Attacking Institutions Including…

Coronavirus Claims More 46 Lives Across The…

Islamabad (May 20, 2018): Commenting on Pakistan Tehreek-i-Insaf’s (PTI) economic policies, Asad Umar said that they would create 10 million new jobs in five years, if elected to power.

“We have to reduce the burden of taxes on traders, businessmen and industrialists Small industries cannot bear the burden of the unfair system of taxation,” he said.

The electricity and gas prices will be brought down as par with other countries in the region, Umar said and added, “We will provide level-play fields  to traders, farmers, businessmen and industrialists.” 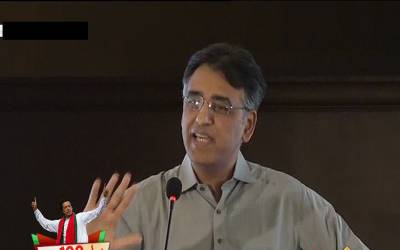 “Let me make it clear that this will be done in the first 100 days by Prime Minister Imran Khan, Inshahullah.”

Four now tourism spots, he said, would be created.  “A competent FBR chairman will be named after introducing reforms in the  Federal Bureau of Revenue.”

“The  biggest problem has been to import coal for power generation.” China Pakistan Economic Corridor (CPEC) is a game changer, he said, adding his government would encourage the private sector to join the corridor.

“We have to bring reforms in our financial system. God willing, this will take place after the election of Imran Khan as Prime Minister,” he said.