WEB DESK: In a rare incident, Abul Bajandar from Bangladesh suffers from a rare condition that has gotten him famous as the ‘Tree Man’.

Abul Bajandar has bark-like growths all over his body and he has undergone 25 operations since 2016 to have these growths removed from his hands and feet, which are caused by a rare syndrome.

He suffers from a rare genetic condition called ‘epidermodysplasia verruciformis’ which is also known as ‘tree man syndrome’.

After the surgery, doctors were confident of the success, but his condition relapsed in May last year. This rare condition is called ‘tree man syndrome’ which causes him unbearable pain due to which Abul Bajandar wants to get his hands amputated. 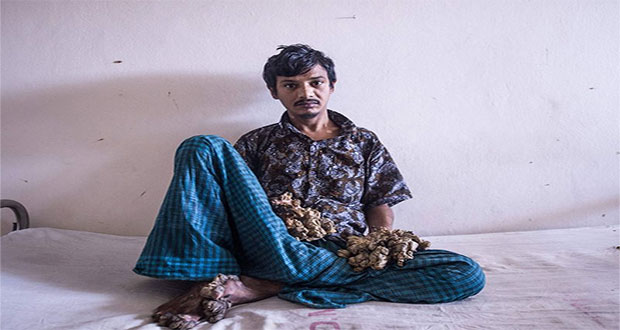 Bajandar conditioned worsened in January and he had to be admitted to the hospital due to the growths on his body being several inches long.

The 28-year-old Bajandar said: “I cannot bear the pain anymore. I can’t sleep at night. I asked the doctors to cut off my hands so I can at least get some relief,” quoted as reported by Indian media.

Abul Bajandar’s plight made it to headlines in Bangladesh and also gained international attention after which Sheikh Hasina, the Prime Minister of Bangladesh announced free treatment for Bajandar.

As per the reports from the Genetic and Rare Diseases Information Center (GARD), there are 200 reported cases of tree man syndrome across the globe.