RAWALPINDI: Chief of Army Staff (COAS) General Qamar Javed Bajwa on Wednesday said that terrorism was eliminated from the country with the support of the nation.

According to Inter-Services Public Relations (ISPR), the investiture ceremony was held at General Headquarters Rawalpindi on Wednesday which was also attended by families of Shuhada and Ghazis

Addressing the ceremony, Army Chief General Qamar Javed Bajwa paid rich tribute to martyrs. “We owe peace and stability to the selfless devotion and sacrifices of these officers and soldiers who are our real heroes.” 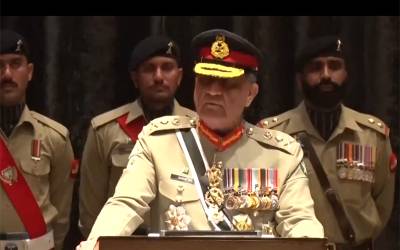 Army Chief, General Qamar Javed Bajwa has conferred military awards to Army personnel for their acts of gallantry during operations.

Medals of Shuhada were received by their family members.

Cause Of Model Iqra Saeed Death Is Still Unknown