Imran Should Answer Pertinent Questions Prior To…

Effective Diplomacy Is Only Possible Through Strong…

World Teachers Being Celebrating Today Across The…

Smog has become a common Phenomenon in winter season in Pakistan these days. After Lahore, people of Karachi are also experiencing the smog but Punjab is major victim since last so many years, where smog attributed to burning of crops stubble and pollution from factories and transport. The brick kilns also a major source of air pollution in Punjab.

Government of Punjab has already imposed ban on 2000 brick kiln for 70 days from early October.

According to data revealed by Pakistan Air Quality Initiative (PAQI), Lahore, a city where smog has become a ‘fifth season’, has the worst air quality, with only two days of good air quality recorded in 2017. 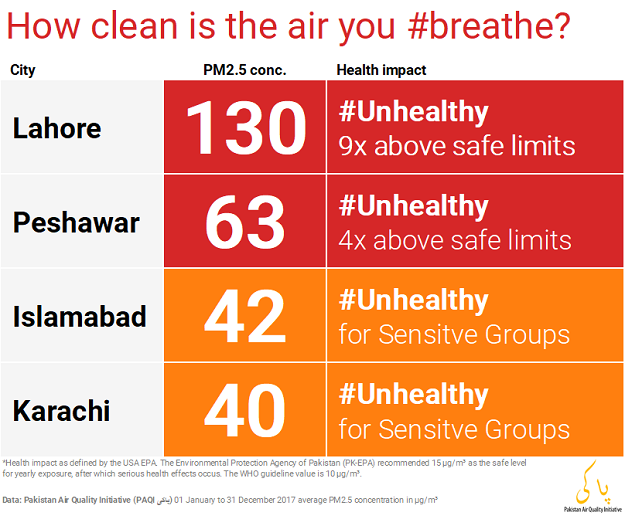 Greenpeace declared an index of air pollution hotshots across the world. They used satellite data for their research and Lahore has 30th place in this index.

According to the World Health Organization (WHO), over 4 million people around the world succumb to air pollution-related illnesses on an annual basis, due to toxic air quality levels that go well beyond the standard guidelines outlined by the WHO.

In addition, the report also highlights countries such as China, India, Pakistan, and Bangladesh that have “increasing trends in PM2.5 exposure.” However, while China has made some improvement in tackling air pollution, India, Pakistan, and Bangladesh “have experienced the steepest increases in air pollution levels since 2010 and now present the highest sustained PM2.5 concentrations.”

In Pakistan, without any government intervention or even social awareness campaigns – informing citizens how to protect themselves from the toxic smog – the past few years have seen an extraordinary rise in air pollution, particularly during the onset of winter. According to a report by Lancet, a medical journal, approximately 22 percent of deaths in Pakistan each year are attributed to air pollution.

What is Smog and How it Impacts Health

Smog is a kind of air pollution, originally named for the mixture of smoke and fog in the air. In the 1950s a new type of smog, known as Photo-chemical Smog, was first described.

Smog is a problem in a number of cities world wide and continues to harm human health.

It can inflame breathing passages, decreasing the lungs’ working capacity, and causing shortness of breath, pain when inhaling deeply, wheezing, and coughing.

It can cause eye and nose irritation and it dries out the protective membranes of the nose and throat and interferes with the body’s ability to fight infection, increasing susceptibility to illness.

When I spoke to Shahid Abbas, Regional Meteorological Director about this growing problem, he explained that fog or smog is formed when temperature falls rapidly.

He added that temperature of sea and land are same right now because sea breeze has stopped.

Meteorological department said that this weather condition will be continued for next couple of days until wind from Quetta starts blowing in Karachi, which will eliminate smog from atmosphere and temperature of city will be more cold than now.

We cannot reduce the already caused harm to the air quality. But with these home remedies, we can improve the immunity of our body towards these pollutants. Here are some quick remedies.

Who Will Do The New NRO?

No One Has Right to Derogate Ministers,PM Imran Khan