Nato Forces To Leave Together From Afghanistan…

Chairman Senate And Others Issued Notices In…

HYDERABAD: Tension prevailed in Amberpet area of Hyderabad, India on Sunday night after two groups pelted clashed over the setting up of a shed on land where the 200-year-old masjid was demolished last week.

The place of worship was demolished by the Greater Hyderabad Municipal Corporation (GHMC) for road widening Wednesday night last week. 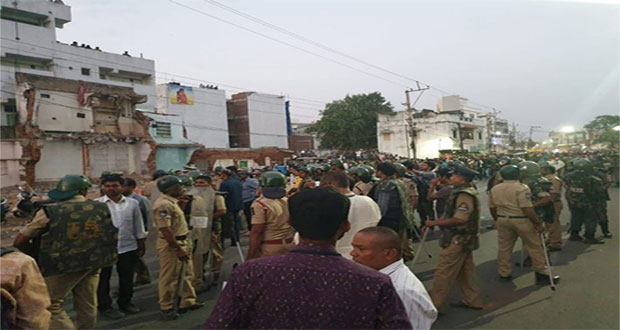 After representations to Wakf Board and Government of Telangana, on Sunday, Wakf Board erected a board declaring that the land belongs to “Masjid-e-Ek Khana” and announced the reconstruction of the masjid.

Later, on Sunday evening, some miscreants attempted to stop the construction of the masjid and pelted stones due to which some Muslims youths and a police inspector got injured.

The miscreants have also raised slogans in the presence of police.