WC 2019: Pakistan To Bowl First Against India After Winning Toss

The game is being played at Old Trafford Cricket Ground located in Manchester as players of Pakistan Cricket Team seem to be high-spirited of breaking the World Cup jinx against India today.

Vijay Shankar will be replacing injured Shikhar Dhawan for India as the opening partner of Rohit Sharma.

Pakistan comes into this match with one win and two losses. The team so far has lived up to its unpredictable tag as they lost to West Indies and Australia but surprisingly beat tournament favourites England.

Strict security measures have been put on to avoid any eventuality before the big match of the world cup.

Ahead of the clash of both cricketing titans, Skipper Sarfraz Ahmed has advised all players to play positive cricket without exerting any pressure.

“Team has high morale. We have good support of our fans here as we wish to play good cricket against India”, skipper affirmed.

Left-handed batsman Fakher Zaman has expressed his wish of scoring more runs against India. In his message, the aggressive opener was hopeful of piling up a big score against Indian bowling attack. 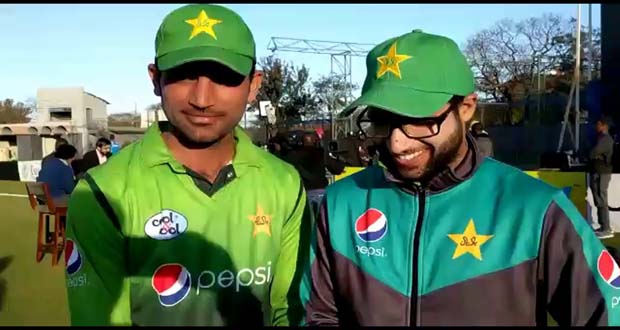 His partner at the other hand, Imam ul Haq also sent a message prior to the clash with India in which he has told that Pakistani side will enter into the stadium with hopes of trouncing their opponent.