PSX Starts With Negative Trend As It…

The Swiss world number two hit the ball sweetly from the start and the Belgian had no answer to his variety and weight of shot, lacking the weapons to put Federer under sustained pressure.

Federer, who had only lost four matches all year, rocked Goffin back on his heels at the beginning of the match, breaking him after multiple opportunities in the first game to establish an early grip. 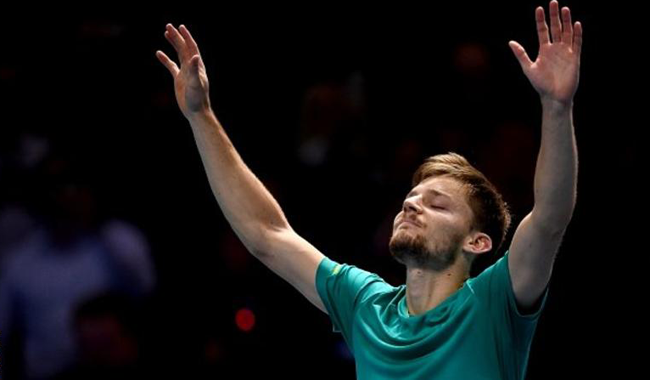 The Belgian regrouped but Federer threaded a trademark backhand down the line to bring up three more break points in game five and secured the double break.

Unveiling his full array of shots in front of a purring crowd at London´s O2 Arena, including a remarkable low backhand volley at the net, he was briefly held up by Goffin but sealed the set 6-2 with an ace.

But in a surprising twist, seventh-seed Goffin quickly found himself 3-0 up in the second set after breaking Federer at his first opportunity and suddenly looked rejuvenated.

The 26-year-old Belgian, who had never beaten his much-vaunted opponent, looked far more aggressive and was not willing to allow Federer to dictate play as the Swiss player lost his precision.

The single break proved enough for Goffin to level the match and take it into a decider.

Federer appeared more focused at the start of the third set but Goffin broke in the third game to take a 2-1 lead and heap the pressure on the Swiss.

In a tense fourth game Federer earned a break point but Goffin fended off his charge to hold and, looking increasingly assured, held again for 4-2.

Goffin rose to serve for the match at 5-4 and made no mistake, holding his nerve to secure a famous victory.

Federer, 36, was joined in the last four at the season-ending showpiece by three first-time semifinalists — Goffin, Grigor Dimitrov and Jack Sock. It is the first time in the tournament´s history that three debutants have reached the semis.

Federer, who has won the ATP Finals six times, in Houston, Shanghai and London, has enjoyed a remarkable 2017 season after a long layoff in 2016.

He won seven titles in total including the Australian Open and a record eighth Wimbledon crown and only Rafael Nadal´s equally memorable season has denied him the chance to reach the world number one spot again.

Dimitrov and Sock will play later on Saturday for the right to meet Goffin in Sunday´s final.