SINGAPORE: A YouTube fact-check feature which is meant to tackle misinformation accidentally tagged live broadcasts of a fire engulfing Notre-Dame Cathedral in Paris with details about the 9/11 terror attacks.

News outlets began live-streaming broadcasts of the fire on YouTube, but below some of the clips an unusual text box popped up — an entry from the Encyclopedia Britannica about the September 11, 2001 attacks in the United States.

A spokesman for YouTube, which is owned by Google, said the text box feature had been disabled for live streams related to the fire. 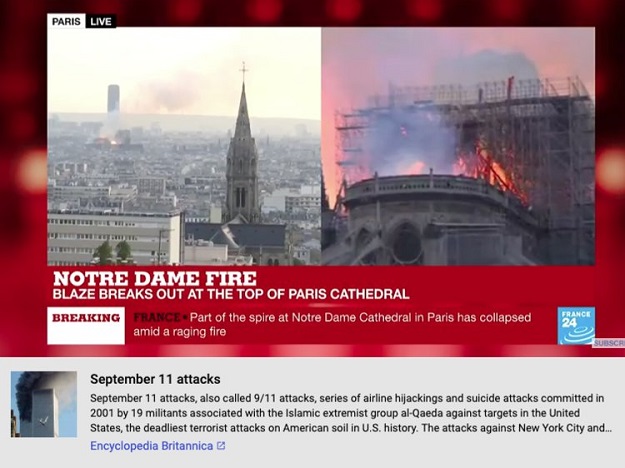 YouTube, Facebook and Twitter came under fire last month after a horrific video of a gunman’s deadly rampage at two New Zealand mosques were circulated on the sites.

Firefighters finally controlled a “devastating fire” after hours of battling that broke out at the iconic Notre Dame Cathedral in central Paris at 7 pm local time on Tuesday.

“The fire is completely under control. It is partially extinct, there are only some other residential homes where the fire needs to be extinguished,” Paris spokesman said.

Both the spire and roof of the cathedral collapsed, but the main structure was preserved, Paris fire chief said.