FM Urges US President To Work On…

Earlier, a notice was served when AbbTakk aired audio of the acting controller in which he was talking about leaking papers in ongoing examinations and Chairman Inter board Karachi has removed him from the post by taking immediate action.

A notification has been issued in this regard.

It was revealed during the audio that the controller of the examination was directly involved in recent cheating scams.

The chairman Karachi Board has also directed Shujaat Hashmi to take charge as acting controller of examination. 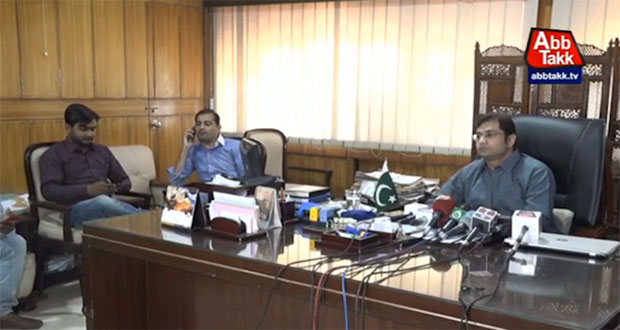 A day earlier Controller of examination Karachi Intermediate Board Azeem Siddique has said that he and his family have threats and risks from the cheating mafia.

Addressing a presser in his defence over cheating and corruption scandal Controller of examination Karachi Intermediate Board Azeem Siddique leveled serious allegations on former chairman of inter-board adding that the former chairman cannot be given clean cheat over changing results.

Controller of examination Karachi Intermediate Board said that audit officer involved in changing results while he informed the media he canceled changed results carried out by chairman and audit officer adding that Zahid Lakho had come to his room and pressurized him to change results.

In his press conference, Azeem Siddique said that the audio appeared on media was not his and categorically said that neither the voice in the audio was his nor he ever took the name of information adviser.

He said that Murtaza Wahab wrongly used in the audio and he (Murtaza Wahab) has nothing to do in this matter.

According to the acquired audio controller examination of inter-board Azeem Siddique involved in changing students marks, assigning centers of someone choice and including carrying out cheating to students.

The controller examination instructed agent of inter-board “ not to go by himself for getting money and send someone other so that if recorded that person could be seen adding that one can be trapped in this task and carry out the task with utmost cleverness.”

Azeem Siddique said to inter-board agent “we will work on 200 copies on per day”.